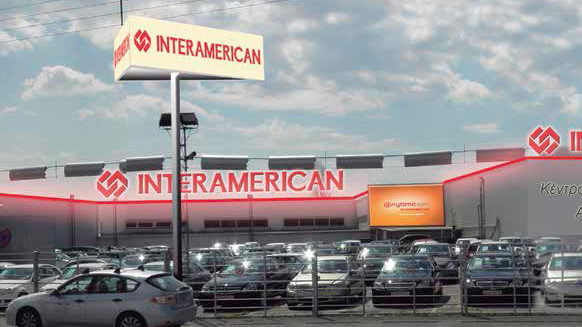 In Greece, PPG Hellas and MVP BUSINESS SOLUTIONS® are supporting the expansion of a growing bodyshop network operated by major insurance company: Interamerican.

Part of the ACHMEA Group, Interamerican is one of the largest motor insurance providers in Greece and also operates in The Netherlands, Ireland,

Until recently, Interamerican has steered all of its local repairs to one bodyshop in Athens. This bodyshop is among the busiest in the region, processing around 3.500 repairs each year and has been benefitting from PPG products and proven MVP approach since 2013. Interamerican has now created a new network named Car Point and has so far approved eight independent bodyshops to provide local repairs.

“Today, this network covers six major cities, spread all over Greece, and serves 75% of our customers. In the future, we plan to expand the Car Point network throughout Greece,” explains Interamerican Technical supervisor, George Oikonomou.

PPG has been selected as the preferred paint partner to serve the new Car Point network with practical support also being provided by MVP Business Solutions.

“When we were invited to tender, we were told that price would be a determining factor. However, our team opted to put forward a proposal that was driven by efficiency and value, rather than pricing,” says PPG Technical and Business Solutions Manager, Antonis Samarniotis.

“This approach paid off as at the end of the process Interamerican confirmed that ‘PPG is not the cheapest but the more efficient’,” he adds.

From the point of view of an insurer, it is essential that repairs to damaged vehicles are carried out as quickly and cost effectively as possible. Lowering costs is a particular priority within the Greek automotive repair market where currently around 97% of cars are only covered by third party insurance. As a further impact of the financial situation in Greece, there are also more than 1.000.000 uninsured cars in circulation.

“Recession has led the market backwards with the single biggest concern being to reduce costs. Insurance owned workshops are practically nonexistent with the current financial situation holding investment back. The CarPoint approach is an exception and one that I believe will be followed by other large industry players in the future,” explains Oikonomou.

The products, training and expert advice provided by PPG Hellas and MVP Business Solutions has helped George Oikonomou and his team to reduce costs by streamlining the refinish process and increasing productivity. “I never thought a paint company could make my life easier until Mr. Samarniotis and PPG jumped into my business,” says Oikonomou, who has worked in the automotive industry for over 32 years.

The standardised processes PPG has helped Mr Oikonomou to implement have not only led to greater efficiency but also to consistently high quality repairs and customer satisfaction throughout the Car Point network.

MVP Business Solutions are offered exclusively to collision repair businesses that use PPG Refinish products. Since the origin of MVP, PPG has continued its commitment to providing collision repair customers with training, tools and services needed to gain and sustain a competitive advantage. For more information, please visit www.ppgmvp.